A look at the equipment angles

Special thanks to TimberWest Magazine for allowing us to reprint their article from their Nov/Dec 2014 edition. 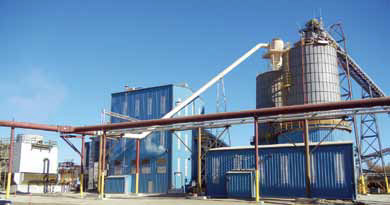 When did woody biomass change from being a waste product to a commodity? Was it back in the late 20s when Robert Bowling of Potlatch Corporation devised the idea of creating Pres-to-Logs out of mountains of useless sawdust? Was it when mill owners started grinding bark into hog fuel to power steam plants and boilers?

Both of these developments were game changers in the industry, yet woody biomass has often remained a headache in the forest industry. Today wood waste makes up 28 percent of most landfills, and slash piles often languish in the woods due to air quality issues. The new and intense search for alternative energy sources, however, has given the various kinds of wood waste new value.

Rawlings Family Gets into Wood Waste

John Rawlings knows plenty about woody biomass utilization, having grown up in the forest industry. His father Cliff Rawlings raised his sons, John, Craig, and Mike, around mills and tinkered enough with wood grinders to come up with the solid rotary wood hog. Up until the 1980s, sawmills generally used hammer mills to pulverize bark into hog fuel for boilers, but many had given up on processing cedar because the bark was so stringy. The grinder developed by Cliff Rawlings used a system of solid rotors that efficiently reduced the more challenging bark without the usual equipment breakdown.

His tinkering led to Cliff and his family signing contracts with Potlatch Corporation to grind up wood waste at several closed-down mill sites. In 1982, the Rawlings family hitched up Cliff’s portable wood hog and worked the sites on a seven-year contract, turning the piles of waste wood into uniformly processed fuel for the co-generation plant operating at the same Lewiston mill where Robert Bowling first developed Pres-to-Logs.

In 1984, Cliff died suddenly, leaving his wife Pat and sons in charge of the family enterprises. It was then that, at the age of 24, John oversaw his first wood hog installation at a Boise Cascade mill in Yakima, Wash. He worked with Gary Tucker, a Lewiston engineer, who helped him learn more about the equipment and its creation. John eventually wound up as head of Rawlings Manufacturing, maker of his dad’s trademark invention.

Now 54, John has marinated in the woody biomass industry for years, improvising and improving on his father’s original designs. Today’s lineup of wood hogs is known especially for handling cedar, black spruce, and poplar more efficiently than the hammer mill models still used in some sawmills.

“We’re not just about boiler fuel these days,” John says from his company’s Missoula, Mont., headquarters. “We always have to change, and change some more.” To that end, the company has set up a new test facility at its Spokane manufacturing center. John says the focus will be on all aspects of wood waste processing, from rotors to screening. He points out that the company just replaced the wood hog his father Cliff originally installed in the 70s at the Potlatch Corporation plant in St. Maries, Idaho, showing the durability of the machinery design.

From Waste to Commodity

A look at the Rawlings Manufacturing comprehensive website (www.wastewoodhogs.com) shows the wide variety of products and applications that have developed as wood wastes have come to be regarded in a different light. “In the past, there was no money in wood waste,” John says. “But hog fuel is more important now. It’s a commodity. It’s dominant especially in existing and new biomass cogeneration plants.”

Out west, John has overseen some especially unique projects, such as the installation of an Electrical Horizontal Stationary Wood Hog at the Whistler Compost Municipality. The system takes the wood waste that would normally be sent to the landfill, processes it through the grinder, mixes it with food waste generated from grocery stores and restaurants, and ultimately sends it to an inline tunnel composter. In 2008, Rawlings also installed the same style of large horizontal rotary hog at the Mitsubishi Concrete plant at Lucerne Valley in California’s San Bernardino Mountains. The idea there was to provide an alternative fuel source to replace coal.

The Lucerne Valley project illustrates the steps necessary in taking an idea to an actual operating system, and it’s no surprise that the Mitsubishi facility took about a year to get off the drawing boards. The concrete company had already scouted for wood supply, sourcing wood waste from landfills within a 150-mile radius. Initially John toured Mitsubishi officials through a plant at Deer Lodge, Mont., and another plant at Usk, Wash., demonstrating various features of the company’s wood hogs.

Once the system ideas were finalized, John’s brother Mike Rawlings and his company, Rawlings Industrial (known in the industry for building some of the largest sawmills in the country), had the system up and running in 45 days. Wood now comes into that plant in a broken down form and is then uniformly processed to two-inch size, with 3/8-inch dirt and debris screened out. The system creates a fairly uniform fuel for the plant’s generating system, a vital step in monitoring consistency in woody biomass energy.

“It’s a great system and everything turned out well,” John says of the 2008 installation at Lucerne Valley. He notes that research for various biomass applications goes on constantly. “We’re not experimenting on anyone,” he adds. The fact that John’s son Cliff is now coming into the business as an auto-CAD draftsman means that John constantly thinks ahead so the family’s business continues to prosper well into the future.

John’s brother Craig, head of Forest Business Network (and a walking textbook on woody biomass), feels that woody biomass is here to stay as a viable energy alternative.

“Is it waste or product?” Craig asks. “If you pay for the stuff, people will get creative. It used to be slash, but if you grind it, it has value. It’s now often just too costly to burn.”

Noting that today’s utilization of waste wood alternatives is still in the experimental stage for things such as jet fuel and other forms of liquid fuel, Craig nevertheless thinks that all such research will be of benefit in the long run. “It’s all economics,” he adds as a reality check. “You have to get the cost down.” His brother John knows that efficient economics have to include efficient equipment. Citing such programs as Fuels for Schools, along with the importance of reducing wood wastes in landfills, John knows there is a good future in woody biomass energy.